This isn't directly "family law" but it's "law" in California that is definitely carved out of both Los Angeles and San Francisco, and then animal activists just carry the ball even further.

Say NO to this kind of crummy liberal nonsense!!!

Zen fascists will control you.
MAY 5, 2016 By David Harsanyi
In California, a 15-year-old girl can abort a viable baby without telling her parents, but starting now a married 20-year-old with a job and kids can’t buy a pack of cigarettes. Or get a drink. That same 15-year-old girl is banned from getting an indoor tan, and a woman must obtain, and give, “affirmative consent” before kissing someone during her college years.
No one can use foam takeout containers or plastic carryout bags or play online poker. This is a state that wanted to ban you from eating the livers of waterfowl. If the state discovers you’ve purchased raw milk, a confiscation team may visit your home to impound the supply. The sale of caffeinated beer is forbidden. E-cigarettes are now treated as if they were tobacco,even if they are not.
OK , below is not related to the article, just thought it was funny........
What does this pic mean?  Dog=child=human  or, Dog=Human.... 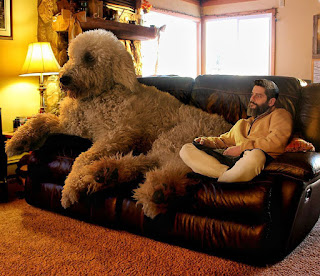