How Can I Fix My Custody Order?

This is one of the most commonly seen issues around. And apparently this is the case throughout the entire state of California.  Further, it is extremely common now to find parents and family with various afflictions, including mental, emotional, behavioral, etc.  In turn, this obviously will affect the kids, extended family, and more.

One of the worst things that attorney sees, and is always surprised each time--is finding that less than half of clients seen-- actually get on some type of program for their mental or emotional issues.

If that was done, it would lessen the effects that travel down to the kids. But when the parents try and take care of their own issues, rather than pretending they do not exist,  it becomes much easier to work with the kids, whether they have any issues or not.

Another very very common scenario is for each parent to blame the other parent. Of course some of that is likely true, but not every set of parents can actually do "co-parenting" ....and attorney believes that parents with issues mentioned above, may not work well in "co-parenting" set ups. 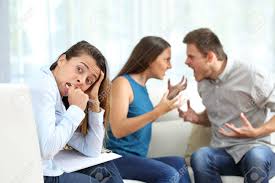 Attorney believes that "co-parenting" assumes that there are not major issues with the parents. But when there are some huge issues with a parent (or both)-- it is highly unlikely that co-parenting will work smoothly simply because the very nature of cooperation is assumed, and quite obviously parents themselves who have issues are not likely to stick with cooperation.

If such parents can prove they can do it, that is one thing, but inevitably usually what happens is, one parent starts taking advantage of the other parent. In other words, there are many parents that believe they should stay together for the sake of the kids.

What they don't realize is the harm they do to the kids when they do not parent the kids successfully?

"Fixing" your custody order might require a re-work of whatever you have in order to FIX it!