Separate Property "Reimbursement" by One Spouse; Or is There Enough $$ Left?

Years ago, the Lucas case decided that a spouse contributing her or her separate property funds toward a community asset meant that it was a "gift" to the community, and basically, the contributing spouse did not receive back the amount contributed.  That is the short version of how it used to be.

Then the California Legislature codified Civil Code Sections 4800.1 and 4800.2 into Family Code Sections 2581 and 2640, whereby a right of reimbursement for separate property contributions (absent express agreement otherwise) come off the top of community property, as the characterization and reimbursement must be determined before the community property is divided. Often the community property is held in joint tenancy but not always. There are many variations between cases as to how spouses held title, the year it was first purchased, or refinanced, or subsequently re-titled to some degree.  Further, case law indicates evidence where money from various sources are used for obtaining assets, then commingled to some degree, then sold and used to buy yet another property with even additional funds from different sources (inheritance, loan payoff, refinance, sale, etc.)

The difficult cases usually involve a series over a number of years whereby the parties have bought and sold businesses and real estate and then changed the way title was held, and spent some of the proceeds but then used part of the proceeds for different things.  As expected, tracing large or numerous transactions can be quite a bit of work.

IN some cases the tracing is not exactly obvious or clear, or title is not exactly clear. Also under FC Section 2640, without a clear written waiver of the reimbursement, the community does not simply get to keep that separate proceed, such as a traceable down payment.  There are many published cases on Section 2640 cases, and quite a few involve convoluted tracing.

The reason that this Code Section is hazardous, is mainly because if one spouse thinks the contributing spouse donated the payment to the community (even if there was no clear waiver of the reimbursement right) then the community proceeds may be much larger or smaller than anticipated, because either the waiver was or was not executed sufficiently. 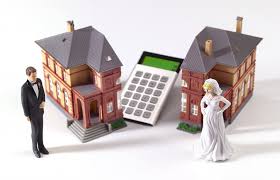 Several years later they get divorced. The value of the house is still $700,000. No new loans were taken out on the house, and it was not refinanced or used for collateral on any other property.

So the question is:  Does the community now obtain any of the gained equity? Meaning, does Bill get any proceeds from it?  The answer is probably no. As can be seen this Code Section can be a trap for the unwary. Appreciation (if any) from point A forward is not necessarily the same as one half of the equity (in the home) when considered under FC Section 2640.  If you suspect you have this issue and do not want to guess or make a mistake, make sure you talk to an attorney that is familiar with this.