In family law cases, Facebook is the primary platform which usually produces evidence of inappropriate conduct.  Mostly because people can't shut up about their bad antics?

Since Facebook likely isn't going to go away anytime soon, parents should carefully consider what they put on Facebook. Facebook is so pervasive there are even laws and published case law involving the use of social media, particularly Facebook and Yelp. Attorney has seen Judges ream a client due to bad Facebook behavior.  Adults should not even need to be instructed re Facebook, but apparently it has become necessary. Kids have all time high rates of depression in part due to the over use of electronic media, see https://www.theatlantic.com/magazine/archive/2017/09/has-the-smartphone-destroyed-a-generation/534198/

Facebook and Yelp will fight to the end to allow people to say anything they want.  This is a little concerning because parents may believe that just because they put stuff on Facebook, it means nothing.  This is incorrect. Free speech, arguing, and denigrating others online is par for the course. But when it comes to Family Law-- people seem oblivious to the ramifications. Personally we don't even believe in using Facebook at all. 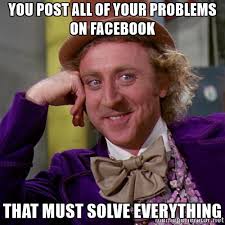 But in Family Law--- attorney always tells clients---get everything you can on Facebook [against the offending party]  if it's relevant to what's going on, because the court will have to at least look at it to get an idea of that party/or your mindset; however judges don't actually like Facebook that much, because it normally causes problems. Remember that the Jerry Springer show was based on sensationalism and hyped up scenarios--- and Family Law is not far behind. Beware that your past Facebook postings can come back to haunt you.  As an example you can see below, that laws are often related to the use of social media:

A federal appeals court in Miami held that a "judge" needn't necessarily recuse herself from a case being argued by an attorney with whom the judge is merely Facebook "friends."  (The clear implication here would be that the judge is friends with one of the attorneys..)

The commonwealth Court of Pennsylvania held that an unemployment benefits board acted appropriately when it releid in part, on an applicant's Facebook post to determine that the applicant was not entitled to benefits.
A Texas law makes cyberbullying punishable by as much as a year in jail and/or a fine of up to $4,000.

........and even WORSE--- according to Harvard Business review, Facebook makes you feel worse if you use it more!!!!  https://hbr.org/2017/04/a-new-more-rigorous-study-confirms-the-more-you-use-facebook-the-worse-you-feel